Undoing queer caravel in the afterlife of colonialism

The particular emergency context of a queer canon in Brazil cannot be conceived apart from an analytical viewpoint concerning the coloniality of knowledge, that underlines what the chilean thinker, performer and activist Hija de Perra once described as a simultaneously colonising of “our third world poor aspiration south-american context” that disturbs the “individuals enchanted by heteronormativity”. If queer colonizes disturbing, it is because it adheres to a historical process in which the foundation of the colonialist political-body project, that predicates the universality of the White european heteronormative subject (its knowledge, politics, performance and anthology), collapses. But what is the point of queer disruptions in the colonized context of the world we know as Brazil (ex-colony, neo-colony, post-colony?) and in what measure, once it proliferates globally, the queer canons do not re-structure the colonial caravels’ logic – serving as support and inscription plan of the ghosts of colonialism on the immediate presence of the collapse of the colony? How to perform and contemplate the genre disobedience and sexual dissents witout reestructuring elitist logics that re-stage the colonial situation? How to deassemble the queer caravel? And how to bring to light the body-politics capable of overcoming life after the death of colonialism and the White, hetero and one genre supremacy, towards other forms of existing, experiencing and making the world.

JOTA MOMBAÇA is a non-binary queer artist, born and raised in the Northeast of Brazil. Writer, performer and a scholar academic around the relations between monstruosity and humanity, kuir studies, decolonial spins, political intersectionality, anti-colonial justice, violence redistribution, visionary fiction and tensions between ethics, aesthetics, arts and politics in the production of knowledge of the globalized South. Current Works are the colaboration with the Politics Imagination Workshop (São Paulo) and the artistic residence together with Capacete 2017 at the 14th Documenta (Athens/Kassel). 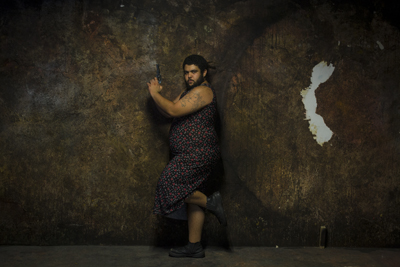 ART AND ACTIVISM IN LATIN AMERICA is a project conceived by Despina, with the support from the Dutch organization Prince Claus Fund. The project extends for three years (2016, 2017 and 2018). Each year, a theme guided a series of actions and events, including occupations, workshops, talks, film screenings, exhibitions, public talks with important names from the contemporary artistic + activist thought and a residency programme. For this second edition, the theme is Body. For more information, click here.