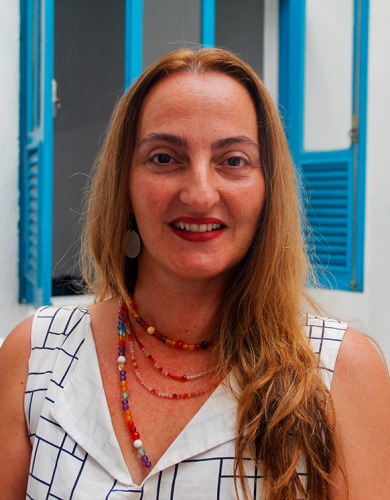 Lives and works in São João Del-Rei, Minas Gerais, where she is a professor at UFSJ (Federal University of São João Del-Rei). Her research investigates urban processes and it deals with topics such as drift, appropriation and an experience with a writing / narrative that requires to be authorial and therefore, partial. Simultaneously with her research, Nascimento also works as a tutor for the interdisciplinary Master’s Program at UFSJ, which is articulated to the project Ephemeral Interventions in Urban Contexts: cultural and artistic action in the transformation of the city’s image.

Her curatorial project for the residence at Despina will take a look on the urban. It will question the place of the urban in the contemporaneity and what is the urban, which is not necessarily the city. In addition to a curatorial practice, the proposal here is to create, with collaborative participation, a sort of inventory of urban readings in an inter- and transdisciplinary process of exhibition-archive-interviews on the theme: Latin American Urbanities . It proposes to list some possible ways on how Latin American urbanities are being expressed in different fields of knowledge, including the artistic and urban. Among the questions raised, the following stand out: Which languages ​​cover such complexities? What do they say about urbanity? What urban elements dignify the city? The presence of nature offers urbanity? And its absence? How are they represented, incorporated or even rejected in different disciplinary fields? Abstract, real, imaginary? What repertoires and references?

This residency is one of the moments (space-time) of this process of creation, of assembly-collage of excerpts raised, like notes in sheet music for a concert, still to be executed. The exposure-file-interviews that result from it is a later process: document, memory and record.

This residence has the support of UFSJ / PROEX and the following students: Pedro Azalim, Nalu Carvalho, Alice Saute Leitão and Luciana Canavez.