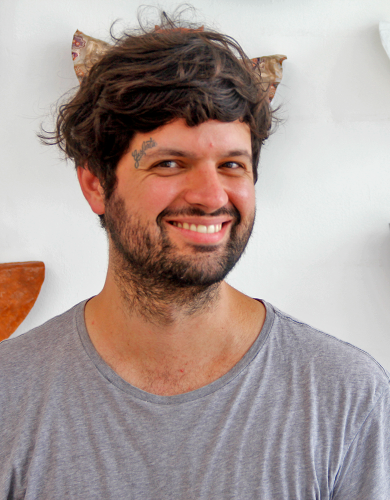 Lives and works between Portugal and Brazil. Since 2010, he has been exploring a series of artistic procedures with an emphasis on expanded painting, mixing his autobiography with other real and fictional stories, bringing together elements of literature, contemporary culture, art history and mythologies from diverse civilizations.

In a substantial part of his productions, Da Mata takes his body as subject and object through the use of tattoos, which are presented as “sentimental prosthesis”, whose mediation is enabled by several formats, such as photography, video and text.

While doing his Master’s Degree course in Fine Arts (sculpture) in 2017 – and already hooked by the work of actress and dancer Loïe Fuller -, he began to build objects from one of the dancer’s costume patents. Then he conceived three-dimensional objects involving textiles, painting and sculpture using different types of glue, papers, paints and remains of shattered dolls. In the midst of a conscious reuse of the waste (not ignoring the evident environmental impacts that we witness in our day to day), the artist emphasizes the choice of paper as a material that brings you a certain warmth, since it alludes to his diaries, notebooks and books. Becoming an invisible material in the established solidification, they eventually resemble the pottery in its configuration.