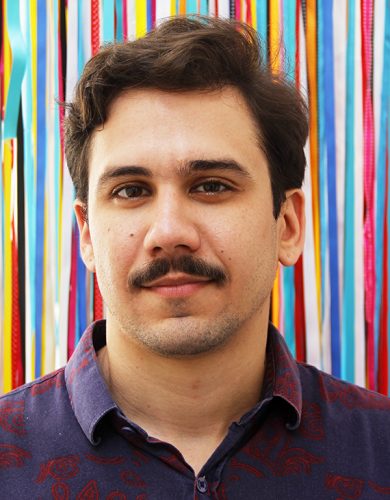 Born in Aparecida de Goiânia (GO), lives and works between Goiânia, Brasília and São Paulo. He holds a Phd and a Master’s Degree in Art and Visual Culture from the Federal University of Goiás (UFG). His works are part of public collections such as the Museu de Arte do Rio (MAR), Museu de Arte de Brasília, Museu de Arte Contemporânea, Goiás (MAC – GO) and Casa do Olhar Luiz Sacilotto. He is a member of the EmpreZa Performance Group.

The body is a dimension constantly explored in his production, an important material, social and geographical support of discussions that permeate situations of conflict, either as a way of experiencing and testing its physical limits, or as a way of translating relations of power. His research develops in various media such as sculpture, installation, drawing, painting, video, photography and performance, addressing the problems and symbologies of the body in contemporary society, its use, control, violence, resistance, abuse and power relationships.

During his residence at Despina, the artist will develop works that deal with the political and social situation of the country, always attentive to the daily events that surround the city of Rio de Janeiro and the surroundings of the studio space.

This residence happens as a result of the award received by the artist at the 6th FOCO Bradesco ArtRio Award in 2018.