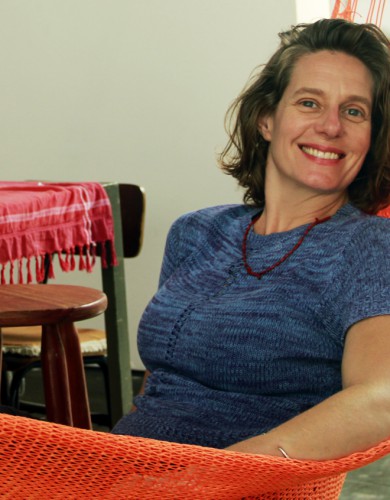 Nancy Popp is a Los Angeles-born and -based artist, educator and organizer. Her work draws upon the rich traditions of durational, corporeal performance and political intervention to explore relations between body as site, the context of site that envelopes the body, and the constant fluctuations that connect the two. Her practice engages both architectural and public space to wrestle with political and social boundaries of geography and identity through risky, playful, endurance-based interventions.  Her media also include photography, drawing, drawing and community organizing.

Nancy’s current focus is the economic and social problem of displacement, re-development and gentrification in municipalities world-wide.  She is in Brazil to engage with anti-gentrification movements in response to the internationally-funded development fueled by the 2014 World Cup and upcoming Summer Olympic games.  Her purpose is to learn from local community efforts resisting economic and cultural inequity, network similar efforts in Los Angeles and other cities, and realize how they might connect to form stronger communities of organized resistance.

Nancy’s work has been supported and exhibited by MOCA Los Angeles, the Getty Center, the 2011 Istanbul Biennial, the Atlanta Contemporary Arts Center, the 2014 Dallas Biennial, Rowan University, SUNY University, CSU Los Angeles, in addition to galleries and public spaces in Belgrade, Düsseldorf, Tijuana, and London.  Recent residencies and fellowships include the 2011 California Community Foundation Visual Arts Fellowship and the Lucas Artist Fellowship from Montalvo Arts Center. She holds degrees from Art Center College of Design and San Francisco Art Institute and is represented by Klowden Mann Gallery, Los Angeles.  She also writes for various magazines and websites on art, education and politics.