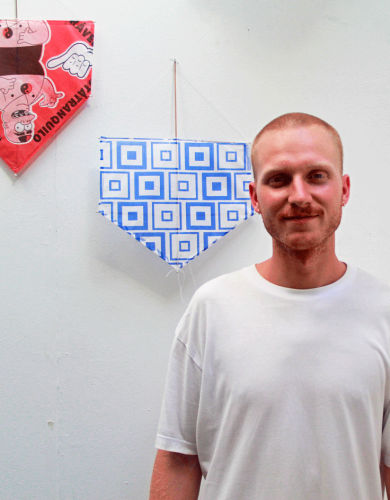 Lives and works in Melbourne, Australia, where he obtained his BFA (Photography) at RMIT University. His multidisciplinary work is a process of cultural understanding and uses the creation of objects as a way to visualise his relationship to people and place.

Since his first trip to Brazil in 2014, Ben has developed an eager curiosity of the Brazilian identity and how the arts have contributed to this sense of self.

Now in the midst of his fourth time visiting Rio, he is attempting to deeply understand his personal connection to this foreign land and his role as an unmistakable ‘gringo’.

The bedroom window in his Copacabana apartment inspired his project at Despina. This structure of solace has provided a contemplative space for which to better understand his relationship to Brazil and his Brazilian partner. The window thus became a portal of voyeurism: a space to peer out, access and retain information. Using photography and performative gesture as a method for self-education, he plays with wind and windows as poetic motifs for his personal exploration of the “Cidade Maravilhosa”.

Pictures Gallery
To be posted soon