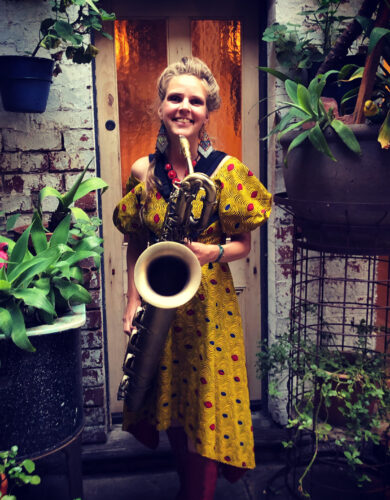 Trilha Sonora is an investigation into the relationship between sound and moving image, and explores the power of music and sound to convey and dictate narrative and emotion. Artist and composer Ania Reynolds has composed for art forms of every description, from circus to film to theatre to podcasts to performance art. In this work she explores the role of the soundtrack as a storyteller by creating one short video with three distinctly different soundtracks, which will be accessed via three sets of headphones. Audiences will have the chance to choose their own soundtrack adventure, or compare the different sonic narratives.

Originally planned as a follow-up residency to Ania’s 2019 Despina residency project Música de Coco, Trilha Sonora has evolved into a cross-cultural artistic collaboration due to the travel restrictions caused by the Covid-19 pandemic. Instead of travelling to Rio to make the work, Ania is collaborating remotely with Rio artist Anna Costa E Silva, who, on the ground in Rio de Janeiro, will gather video footage of Rio which she will send to Ania to create the video component of the work. Ania will then score the video from her home studio in Melbourne, Australia, and the final work is planned to be presented at Despina in Rio in early 2021.

This project has been assisted by the Australian Government through the Australia Council, its arts funding and advisory body.