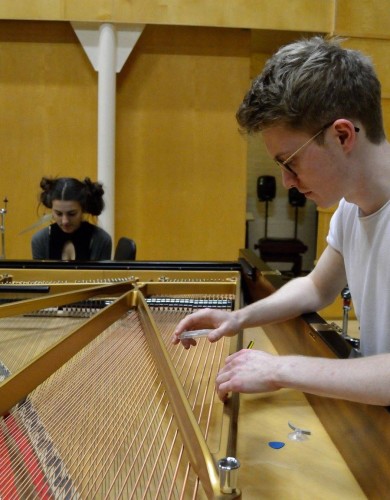 Despina resident artist, Henry McPherson, seeks local artists who are interested in working with sound to participate in a free sound workshop. Henry is a Scotland-based artist and musician who works with collages of found sounds, music and improvisation, space, and the body. He is currently on a residency with Despina through the Open Bodies Residency (Residência Corpos Abertos), and he is exploring the idea of mapping the city of Rio through recorded sounds. During the residency, Henry is documenting sounds in locations of importance to the queer/LGBTQ(+) community, building a series of sound-walks, and investigating how our bodies relate to the sounds around us.

Henry is seeking between 1 and 5 local artists who have an interest in working with sound, the body, and engaging with new and different ways of listening, to take part in a small group-workshop on Thursday 20th September. The workshop will feature a short group discussion, followed by exercises in listening to the body, the room, and surroundings in Despina (R. do Senado, 271) and in nearby Campo de Santana (Praça da República). At the end of the session there will be a short discussion and feedback. Participants are advised to wear comfortable clothing, and are welcome to bring musical instruments if they choose. The workshop will take place between 12pm and 4pm, and will be conducted in English with Portuguese translation.

This workshop is free of charge and places are limited!

Send us an email to cursos@despina.org with the subject “Sound/Body/Space” + name + contact phone number.

Henry McPherson is an inter-media artist based in Glasgow, Scotland. His practice in composition, improvisation and performance is embedded in mixed-media score-production, devised performance, present-time composition, cross and inter-disciplinary practice, through which he explores personal and collective identities, musical and otherwise performative traditions. Henry’s work centres around the body-mind, score-object as mediator, the subject of invocation, impulse-led generation, queer and sustainable art practices, and meanings of ownership in collectively-generated improvisation. He is a founding member of Glasgow’s mixed-arts collective EAST (Experimental Artists Social Theatre), KUI piano duo, and the chamber trio Savage Parade. In recent years, Henry has collaborated with groups and individuals such as the BBC Scottish Symphony Orchestra, BBC Scotland, Martyn Brabbins, RedNote ensemble, The Glasgow New Music Expedition, Garth Knox, Zilan Liao and Germany’s Ensemble Modern. He is a graduate of the Royal Conservatoire of Scotland composition dept., and is an award holder of the Dinah Wolfe Memorial Prize for Composition (2014); Scottish Opera’s Opera Sparks Competition (2016); the Patron’s Prize for Composition (2017); the BBC Scottish Symphony Orchestra Composition Club Prize (2017); the Harriet Cohen Memorial Music Award (2018); and was a nominee for the inaugural Scottish Awards for New Music (2017). He has been awarded residencies at the Banff Centre for the Arts and Creativiy (CA, Alberta, The Creative Gesture: Collective Composition Lab for Music and Dance), Despina (Open Bodies Residency, Brazil, Rio de Janeiro, with the Fruitmarket Gallery Edinburgh) and Skammdegi Residency and Festival (IS, Olafsfjördur).

Open Bodies Residency (Residência Corpos Abertos) is a programme designed jointly by Despina and The Fruitmarket Gallery, with support from the British Council and Creative Scotland. It seeks Brazilian and Scottish-based artists who make performance and whose work is interested in gender and/or sexuality. The programme is in two parts. The residency will take place at Despina in Rio de Janeiro, Brazil, in September 2018. The selected artists will participate in a range of cross-cultural activities such as public talks, sharing of work events, studio visits and exhibition tours. Part two of the programme sees the Scottish artists participate in the Open Out programme at The Fruitmarket Gallery in Edinburgh in February 2019 (dates tbc between 11–24 Feb). The artists will propose workshops and lead a programme event. The four selected artists who will be attending this year’s programme at Despina are: Miro Spinelli (Brazil), Vinícius Pinto Rosa (Brazil), Henry McPherson (Scotland) and Stephanie Black-Daniels (Scotland). They will take over Despina’s residency studios to develop their projects and participate in a series of events and activities, including public talks and workshops.