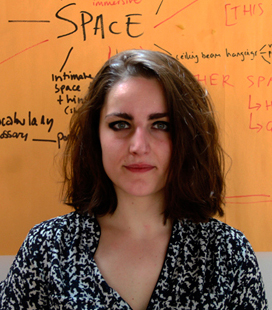 Carlotta Novella, originally from Venice, where she graduated with a BA in Construction Management, she now lives and works in London where she graduated in 2015 from MA Architecture: Cities and Innovation at Central Saint Martins, University of the Arts London. She is currently working with the art and architectural practice public works.

Carlotta’s work addresses contemporary socio-political and cultural issues through a spatial lens, focusing on the interplay of use within and between private and public spaces. Her fifth year project, ‘Industrious Neighbourhoods’, proposed alternative urban strategies and design interventions to facilitate home-based work for social housing tenants. A great believer in collaborative work and making, her projects include temporary, socio-spatial and mobile structures, architectural drawings, participatory workshops, events and performances.

During her participation in the Despina Residency Programme, she will be will exploring existing typologies of collaborative work and communal making within the dwelling space of the home and the social space shared by the local community of a specific neighbourhood in Rio. With the medium of small scale manufacturing and collective making workshops, run both at the studios and outside the gallery over the residency period, she will create a set of objects, tools and props, inspired by the narratives and the necessities of a number of local residents running a business from home. These objects, eventually collected in a mobile archive, will be donated, shared and exhibited by the hyperlocal entrepreneurs and the community where they belong.

During the month of March 2016, Despina Residency Programme leads a special cycle in partnership with Central Saint Martins, University of the Arts London. Four newly graduated artists were selected and commissioned through an open call conducted by the British institution to participate in our programme.