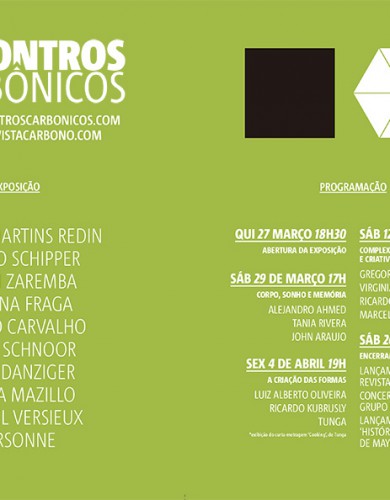 The editors of Revista Carbono, Marina Fraga and Pedro Urano, held the first edition of “Encontros Carbonicos”, a group exhibition of contemporary art, with the participation of artists and scientists engaged in interdisciplinary dialogue. The event took plae at Despina | Largo das Artes from 27 March to 26 April 2014.

In Otavio Schipper’s work ’The Speed of Light’, the artist constructed a point of focus with metronomes, old eyeglasses and telegraph keys connected by steel cables, articulating the invention of perspective by Renaissance architect Brunelleschi, with poetic reconstruction of a device designed to measure the speed of light.

The exhibition comprised a heterogeneous group of works on different media. Mayra Martins Redin presented her ‘Listen Listening’ series, which won an award in the last “Novíssimos” exhibition at Galeria Ibeu. Lilian Zaremba displayed a video in which she investigates the stone galena, an electromagnetic mineral, which formed the basis for the creation of transmission by radio waves. The electromagnetic force is also at the center of the work ‘Image Latency ’ by Mary Mazillo. Fabia Schnoor showed her ‘Moths, Dots and Lines’ series, which explores the path left by moths in an old book about the lives of animals.

Danilo Carvalho displayed a film in which he rescued amateur-8mm footage of Ceará’s capital (Fortaleza). Leila Danziger peeled off pages of a science newspaper leaving only traces of the original and thereby re-imagines the story. The musician and researcher Rodolfo Caesar, who studied with Pierre Schaeffer at the Groupe de Recherches Musicales at the Paris Conservatory, closed the event with a multimedia presentation of the group ‘Personne’.

Besides the conference, ‘Encontros Carbônicos’ promoted debates open to the public. “The idea is to create a space for interdisciplinary experience in which artists and scientists present their research. The meetings take place within the exhibitio and the idea is that the discussions are not limited to oral presentations, but also pervade the materiality of the works exhibited”, explained the curators.

Participants in the debates were visual artists Tunga and Ricardo Basbaum, choreographer Alejandro Ahmed, mathematicians Gregory Chaitin (complexity theorist and professor emeritus at the IBM Watson Research Center) and Ricardo Kubrusly (also a poet and director of the Institute of History of Science UFRJ), cosmologist Luiz Alberto Oliveira (researcher at the Brazilian Center for Physics Research ) and psychoanalyst Tania Rivera. The debates were broadcasted live on the event’s website which also offered an online catalogue with photographs of works, texts and audio-visual material produced during the exhibition.

“’Encontros Carbônicos’ attempts to present art as an intellectual discipline as important as science or philosophy. Works and authors are invited to establish a common dialogue, working with divergent perspectives on reality”, explains Marina Fraga. “The artistic propositions affect our senses and intellectually, often introducing a reality that differs from rational thought. This then opens a space for creativity”

The first edition of ‘Encontros Carbônicos’ was sponsored by Funarte through its National Network Visual Arts Program and had the institutional support of Despina | Largo das Artes. 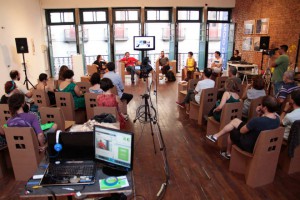 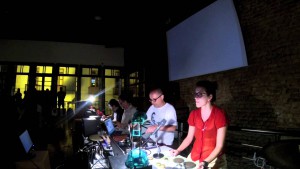 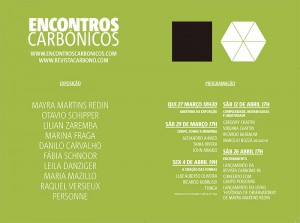