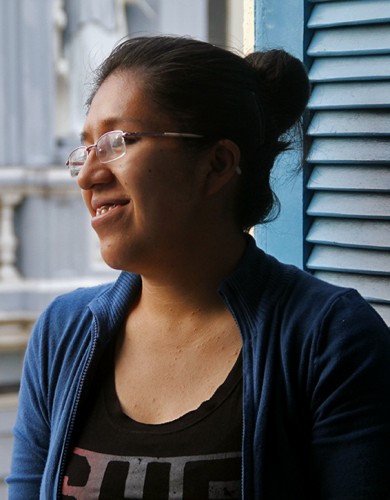 Lives and works in La Paz, Bolivia. Luna is a cartoonist and graphic designer, graduated in Visual Arts from the Universidad Mayor de San Andrés, specializing in sculpture. Since 2011, she has been part of the anarcho-feminist movement “Mujeres Creando”, one of the most important and influential political platforms in the country, which develops artistic intervention and performance projects in public spaces, as well as art and screen printing workshops and educational programs in universities and women’s unions.

Amongst the recent exhibitions she participated as part of “Mujeres Creando”, we highlight:  “Muros Blandos”, held at the Salvador Allende Solidarity Museum in Santiago de Chile (2017), where she developed, alongside artists and activists Esther Angollo and Maria Galindo, a series of provocative and ironic murals that brought the attention to some political and religious controversies around the discussions on gender identity. In 2016, she developed (also with Esther and Maria) a commissioned work for the Bolivian International Biennial of Arts –  the public intervention projects “Altar Blasfemo” and “Escudo Anarco-Feminista Antichauvinista”, which took place on the external wall of the National Museum of Art City of La Paz. In 2015, she participated in the Medellin International Art Meeting – “Historias Locales / Prácticas Globales”, in Colombia, where she coordinated with other members of the collective the screen printing workshop  “Grafica Feminista, No acepto ser cosificada” in the Muesu of Antioquia. The results of this experiment were displayed on a public mural in the streets of Medellin.

During her residency in Rio de Janeiro, Luna will coordinate a “feminist graphic workshop”, which will take place on 7 different dates during the months of May and June. The results of these meetings will be compiled in a printed memory. More information to be posted soon.