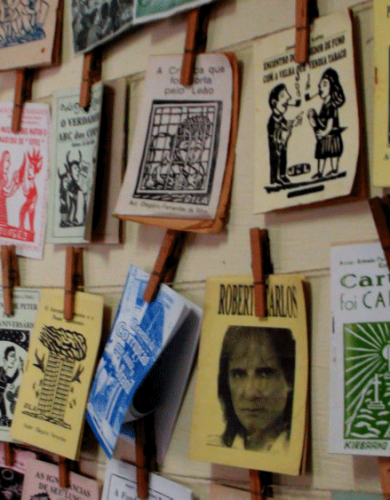 We are happy to announce the first event of 2018 in our new headquarters! Come along for an evening of talks with Danish curator Nina Wöhlk and French artist Matthieu Laurette, with the participation of curator Pablo Leon de la Barra.

Wöhlk will present some thoughts that she has been invested in during her residency at Despina. Through an investigation of the creative processes of speculative fabulation – the telling of new (his)stories as an artistic method, she will address her interest in Donna Haraway’s notion of “string-figures” in relation to the Brazilian Cordel – stories on a string, and the possible agential potential of the literary genre. A reference to the Danish writer and artist Amalie Smith and her next book “Et hjerte i Alt” (roughly translated to: “A Heart in All”) will be made. In this book, a collage of texts written throughout 10 years forms a “Moebious strip”. From there, she will speculate of the connections between the Brazilian cannibalism, addressed by the XXIV Sao Paulo Biennial in 1998, and its relation to the Danish method of “vandalism”, voiced by artist Asger Jorn in his initiation of the movement “Scandinavian Institute of Comparative Vandalism” (SISV) in 1961 (-1965). The aim will be to say a few words about deconstruction and speculation as two artistic methods and generators of new (hi)stories.

On the other hand, Laurette will talk about his artistic career and his latest project, “Tropicalize Me,” an experiment that seeks to dissect the notion of “tropic” and the different perceptions within this concept. It started in Bogotá in 2010, consisting of Laurette asking diferent personalities of Latin American art world whom he knows personally to give him a list of tasks, actions or experiments to enact in attempt to “Tropicalize” him. Dealing with the fantasy of the exotic, and underlining its discontinuous nature, the project merges conceptual practices with in situ resources. “Tropicalize me” unveils an ambiguity in contemporary artistic communities longing for frsthand identifcation with socially constructed post-ideological productions turned into commodities.

We kick off at 7:30 pm. Our new address is Rua do Senado, 271 – Centro (the blue and yellow building between Cruzeiro College and the Biscoitos Globo factory). Admission is free. There’s a 24 hour parking in front of our building.

NINA WÖHLK lives and works in Copenhagen, Denmark. Since 2012, she has been engaging as an independent curator and a writer in discussions and knowledge production within an expanded field of contemporary art. Her main research interests lies in the inseparability of the art work and its context. At the moment, she is researching performative practices in contemporary art and its relation to emerging discursive thinking. Her connecting fields of awareness are the nordic indigenous cultures and trauma as past experience through re-doings (as opposed to re-enactments). In Rio, she is familiarising herself with the performative practices of the Brazilian neo-concrete movement and its presence within the arts today. As a curator of the art institution Læsø Kunsthals three year programme for 2016-2018, she is unfolding the profoundly inspiring and progressive work by Danish artists Per Kirkeby, Jørgen Haugen Sørensen and Asger Jorn through solo exhibitions, that are branching out into many different contexts and situations, making them relevant, present and engaging again. In 2018, she will curate an exhibition with Asger Jorn, founding member of the movements of Situationist Ideale, CoBRA, Bauhuas Imaginiste and non the least Scandinavian Institute for Comparative Vandalism in Europe, the latter being emphasised in the coming exhibition through contemporary artists engaging in dialogues with the legacy of Jorn’s artworks, theories and ideas. Her residency at Despina is generously supported by the Danish Arts Foundation and Knud Højgaards Fund, Denmark. More information: www.ninawoehlk.dk

MATTHIEU LAURETTE lives and works in Paris, France. One of the frst “new media” artists to have operated in the 90’s, Laurette has used stereotypes, role models and processes borrowed from the media and more largely from the idea of the “Society of the Spectacle,” thoroughly in his work. His practice directly questions the relationship between art and life, from his first works in which he appeared on popular television programs to later more complex apparatuses about value and economic circulation, and now to his current work, which is centered on the artistic persona itself, registering actions via certifcates, photographs, and social media. Having used dematerialization as his main strategy for over 20 years, Laurette can be seen as a visionary precursor of current artistic strategies afirming the virtual and the network as efective, IRL artistic material. His best known works are “Apparitions” (1993), “Produits Remboursés” (1991-2001), “Citizenship Project” (1996) and “El Gran Barque” (2000). He has already exhibited at the Pompidou Center (Paris), Guggenheim Museum (New York), The Venice Biennale, among others. He is a laureate of Institut Français Hors les Murs program and his project has been selected and supported by Fondation Nationale des Arts Graphiques et Plastiques. More information: www.laurette.net

* This talk will be held in English only.