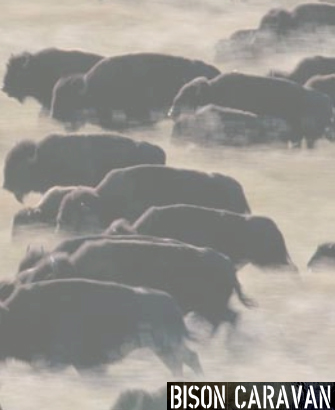 Bison Caravan is a social sculpture formed by works of art that resemble the image of a bison and travel the world. Where the “flock” stops and rests, an exhibition and a festival take place.

Local and international artists are invited to create works of art collectively. These works must represent or be related to the image of the bison.

The bison is a metaphor for the connection of art with nature, resonating in the theories of Joseph Beuys, a German artist who coined the concept of “social sculptures”.

The caravan has already passed through Denmark, France, Holland, Poland, Mali and Canada, incorporating works of more than 300 artists.

Bison Caravan travels on an unpredictable track where works of art are united by  artists from different continents; they unite at the same time that they destroy boundaries and separations created by human history.

The project was created by the Dutch artist Hilarius Hofstede and is partially funded by Mondriaan Fonds. Given its nomadic character and the dialogue between culture and nature, Bison Caravan contributes to current policy debates on (i)migration and sustainability.

How it works? During the Bison Caravan Rio 2017, local artists are invited to form a “flock” along with a group of Dutch artists. The idea is to create works inspired by the image of the bison and to donate them afterwards, so that they become part of a universal collection. These works produced can be never sold, reinforcing the unlimited power of art, which goes beyond the limits of politics, economics or religion. Bison Caravan is an autarchic foundation. After having traveled the world, the collection will eventually be donated to an Amerindian cause.

Between 7 and 9 March, the collaborative process between Dutch and Brazilian artists takes place at the Despina, where participants can meet and work on the development of the works. All this process culminates in the presentation of the results in a multidisciplinary event on 10 March, open to the public.