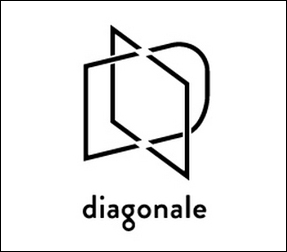 Canadian contemporary art center Diagonale has been a partner of Despina since 2015 in a special project which grants artists who live and work in Quebéc to participate in our residency program.

This initiative is supported by the Conseil des Arts de Montréal and it aims to encourage the experimentation and development of contemporary artistic practices and promote the international mobility of artists who use fiber in terms of material and work concept.

The residences have a duration of 1 month and are 100% focused on the process, allowing the visiting artist a production in response to the new environment and to the new dialogues, which include activities such as workshops, meetings with curators, visits to art studios and other cultural spaces as well as an open studio event at the end of the residency.

Lives and works in Montreal, Canada. She is interested in the many ways the world can be experienced in the absence of a physical body. Through installation, (textual) correspondence, drawing and video, her work call into question the binaries of transcendence/immanence and real/virtual.

Through devices — both tangible and intangible — Voghell utilizes a personal mythology pointing to an experience beyond the lived world, but drawn from a very real subject. Her work emerges from the desire to define the peculiarities of the elemental and phenomenological forces surrounding us in order to better manipulate and reinvent them.

Her work has been featured in various screenings and exhibitions including “harbinger” at Eastern Bloc (2015), at FME in Rouyn-Noranda at Center l’Écart (2015), at Le Lobe in Chicoutimi (2016), at Paris Variation Fair (2017) and more recently at Calaboose Gallery in Pointe-Saint-Charles (2019) and Vicki Gallery in Newburgh (2019). Her work has been included in publications such as Nut II, ETC MEDIA and Cigale. She also curated the “Episode Laurier” event in June 2018.

Check here Voghell’s profile page which includes some photos and a curatorial statement (in Portuguese only). 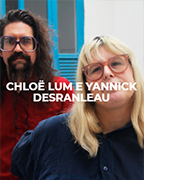 Chloë Lum and Yannick Desranleau are multidisciplinary visual artists based in Montreal, Canada. Their work focuses on theatricality and the choreographic; in their performance work but also in their interest in staging tableaus and working with ephemeral materials that can be said to perform through redeployment and decay. The duo’s recent works investigate the agency of objects, the material condition of the body, and the transformative potential that bodies and objects exert upon each other. These interests are informed by Chloë’s experience with chronic illness and its effect on their collaboration as well the duo’s exploration of narrative tropes from literature, theatre and television.

Recently, their work has taken an autobiographical twist, dealing with chronic disease, and how it alters the materiality of the body and affects its communication with the external world. It is important for them to show the body in action, in order to illustrate the haptic discomforts and discoveries during a first contact between two bodies ; this is why performance and video have become two of our favourite mediums, in transition from their installation works.

The research of the duo in Rio de Janeiro focused on Brazilian writer Clarice Lispector’s letter archives and also on the experimentation with costumes and accessories, which will be used in a future video performance.  While continuing on the theme of chronic disease, Chloë and Yannick want to approach it from the transformation angle – a sensorial and physical phenomenon that they want to illustrate by the phenomenon of the « second skin ». Thus, the duo is interested in deepening their investigation on the elasticity of fabrics and their capacity to give the impression of transforming the body shape by these properties – until perhaps prolonging it.

Lum & Desranleau have exhibited widely, notably at the Center for Books and Paper Arts, Columbia College, Chicago; the Musée d’art contemporain de Montréal; the Kunsthalle Wien; BALTIC Centre for Contemporary Art; Whitechapel Project Space, London; the University of Texas, Austin; the Confederation Centre Art Gallery, Charlottetown; the Blackwood Gallery, University of Toronto; and the Darling Foundry, Montreal. The duo is also known on the international music scene as co-founders of the avant‐rock group AIDS Wolf, for whom they also produced award-winning concert posters under the name Séripop. Their work is in the collection of the Victoria and Albert Museum, the Montreal Museum of Fine Art, and the Musée d’art contemporain de Montréal.

Check here the duo’s profile page which includes some photos, videos and a curatorial statement (in Portuguese only). 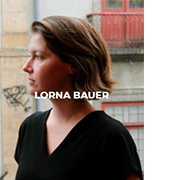 Born in Toronto, lives and works in Montreal (Canada). She has recently presented her work at The Loon, Toronto; CK2 Gallery, New York; The Darling Foundry, Montreal; Model Projects, Vancouver; the Musée d’Art Contemporain de Montréal among other places. Bauer has participated in numerous national and international residencies, including stays at The Couvent des Récollets, Paris; Quebec-New York Residency funded through the Conseil des arts et lettres du Québec; The Banff Centre, Alberta and the Atlantic Center for the Arts, Florida; working with the artist Josiah McElheny. She operates the artist project space L’escalier (together with Jon Knowles and Vincent Bonin) in Montréal.

Lorna Bauer works mainly in photography, installation and most recently, glass and bronze. Her formal language and use of materials alludes to ideas developed through city planning, and urban theory. Her work focuses on specific examples of architecture, urban planning and psycho-geography within the 20th Century. Her projects are generally characterized as site related, leading to a final result that has responded to a specific place and context. Interests are wide and range from topics such as the Paris city plan, in particular the arcades and the underground mushroom cultivation in the Parisian catacombs, Haussmannization, North American west coast utopian gardens from the nineteen sixties to Walter Benjamin’s letters to his lover, describing the Island of Ibiza, while in exile.  All of her projects deal with spaces and how they shape individual perceptions and the correlation between the natural and the built environment.

Check here Bauer’s profile page which includes some photos, videos and a curatorial statement (in Portuguese only). 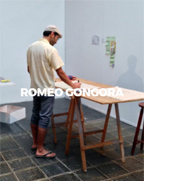 Romeo is a Canadian-Guatemalan visual artist. His participatory art works employs radical pedagogy to promote socio-political and human awareness. Romeo collaborated, amongst others, with the Rencontres de Bamako (Mali), CCA – Lagos (Nigeria), Centre of Art Torun (Poland), Festival Belluard (Switzerland), HISK (Belgium), The Office (Berlin) and Open School East (London). In 2007, he took up a two-year residence at the Rijksakademie van Beeldende Kunsten (Amsterdam). In 2009, he represented Canada as an artist in residence at the Künstlerhaus Bethanien (Berlin) and at the Acme Studios (London) in 2016.

What would identity look like in a utopian world? Awaken Dream. New Models of Identity is a grassroots community art research that harnesses the capacity of creativity to offer a space for imagination as a tool for self-empowerment. Romeo’s residency project consisted of engaging a group of people from the local community of Rio de Janeiro to imagine a clothing collection for a utopian society. The residency culminated in a fashion performance-installation about otherness, cross-culture/religion, which brought individuals and groups in contact.

Check here Gongora’s profile page which includes some photos, videos and a curatorial statement (in Portuguese only). 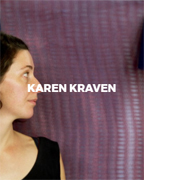 Karen lives and works in Montreal, Canada. Her recent solo exhibitions include the ICA at the Maine College of Art, Portland, ME (2015); Darling Foundry, Montreal (2014) and Mercer Union, Toronto (2015). Reviews of her works have been published in Canadian Art Magazine and Artforum. Karen has received grants from the Canada Council for the Arts, the Quebec Council for the Arts as well as a fellowship from the Dale & Nick Tedeschi Foundation. She is represented by Parisian Laundry in Montreal.

Karen is inspired by the clothing and accessories that athletes and spectators wear. She is attracted to the patterns in a flurry of basketball players, the competition of their bright jerseys and the distracting crowds, waving scarves in the background of the free throw line or the wavy, moiré pattern from an announcer wearing a striped shirt. Like Harlequin, whose role in Comedia del Arte was to distract, the costumes of athletes, spectators and sportsman are distinctly designed to standout like a bird of paradise, but also to camouflage each individual, like in a flock of birds. These flashy markings emphasize speed and movement of the body, while potentially distracting an opponent’s eye.

In her work, Karen has been making handmade fishing nets, photographing mesh sports fabric and stretching spandex fabric stretched over partial body forms. She has also been making sculptures of gymnastics costumes and horse race lady hats. Her main interest is the gender politics of sports clothing, and the latent sexuality embedded in how much or how little is covered up as well as the tight or loose opposition when fabrics and garments are viewed as a second skin.

The artist’s research lately has been focused on early sports costumes, designed by constructivist artist Varvara Stepanova, who exaggerated and abstracted the appearance of movement of the body, by using geometric forms and lines, like racing stripes. She has also been researching the surrealist fashion designer Elsa Schiaperelli, who designed the famous shoe hat and lobster dress.

After an open call led by Canadian institution Diagonale, with the support of Le Conseil des Arts, Montreal, Karen was selected and commissioned to join Despina Residency Programme. While in Rio de Janeiro, she was interested in the history of textile design in Brazil and in the use of recycled materials in handmade textiles, rugs and bags. She also collected different kinds of fabrics found in local shops around the SAARA commercial area and created sculptures from combining these materials.

Check here Karen’s profile page which includes some photos and a curatorial statement (in Portuguese only).