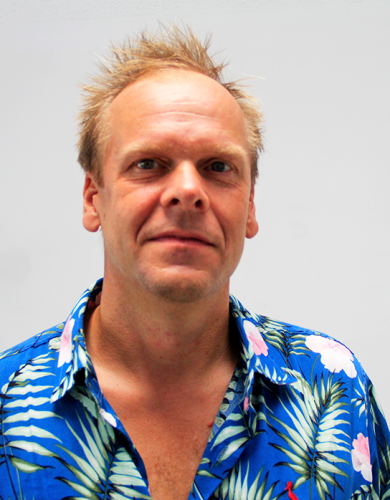 Born in Sweden, lives and works in Copenhagen (Denmark). Per is an artist, curator, art historian and boat builder.

As a curator, his interest is to give openness to both artists and audiences in relation to the subject and interpretation, letting the theme of an exhibition break down itself, or asking the artists not to focus too much on the given subject. The reason for this is not to hide something or create some kind of mystique, but to create an uncertainty that in turn generates questions and plays with the audience’s habits of thought.

In his role as a writer, Per has worked as a critic and as an essaist on contemporary artists for a Swedish encyclopedia. In both of these forms of writing, he primarily tries to immerse into the frameworks that the individual artist sets up for their practice, conveying them for the reader in an uncomplicated and comprehensible way.

Two years ago, he finished his biggest writing project – The Glorius Ways of Unproductivity -, a book based on 50 works by the Danish group Fluxus and intermedia artist Eric Andersen. The book was created in close collaboration with Andersen himself and is more of an artistic work than a biography. The book takes form of a textbook in intermedia, that means: a textbook for all levels of education, on how to use all forms of material and media, to create all possible forms of expressions.

During the residency at Despina, Per hopes to find local artists which might be interesting to present for a Scandinavian audience and exhibit them in one of the two projects mentioned bellow:

1) A follow-up of his most recent curated exhibition: The World’s Last Exhibition. The background for this exhibition theme is the apocalyptic rhetoric that both right-wing and left-wingers use and which overflows the media images we are served every day: terrorism, environmental catastrophes, pandomics, the ever-present risk of economic collapse, etc. Part one was a pure video exhibition; while the exhibition he is planning now to work on should include all forms of expression. The basic idea is that the exhibition appears as the-pre-apocalyptic-party.

2) Another exhibition idea that he wants to explore is the selfi-adapted-art. The form of art that is very profitable to show at art institutions and museum. An art that gets the audience to photograph themselves in front of the works, and then share the pictures on social media, thus creating a free promotion for the exhibition.

Recently, Per has started a new creative writing project, a project that links his practice as a boat-builder with his practise as an artist and an art writer. For this, he intends to study the traditions of different Brazilian wooden boats.