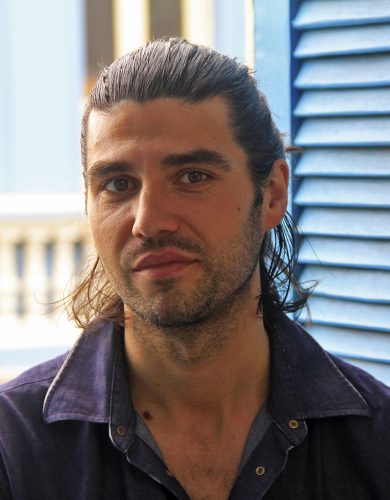 Lives and works in Zürich, Switzerland. Vogel studied music at the Zürich Academy of Fine Arts and his passion for the visual arts came upon in Florence (Italy), where he had some inspiring encounters with local artists. Having seen an exhibition about the Vorticism movement – held in 2011 at the Guggenheim Museum in Venice – he was introduced to the works of French artist Henry Gaudier Brzeska. That has become a strong influence to start his own way of thinking and to create works of his own.

In 2016, Vogel started working in a studio space in an old industrial complex in Zürich, where he could immerse himself in an intense period of practical work and research. Held in Zürich in 2017, “Notes From the Underground” was his first solo show, which brought together a series of intuitive abstract paintings. Since then, he has had the possibility to show his works in selected spaces in Zürich. In 2018, he was awarded during a juried collective show at the Onishi Gallery in New York (USA). In 2019, he presented works in Venice at the Misericordia Archives and in London at the London Biennale.

In his practice, Vogel seeks to reveal the existence of the subconscious by transposing it into paintings. For him, the act of creation is like an improvisation performance guided by the expression of rhythmic emotions. He believes that innovation can only be achieved by the quality of sincere personal conviction. Every start of a new work is therefore a beginning of an expedition to the inner self and a revelation of an emotion, beauty, ancient information and perhaps an answer to modern life.